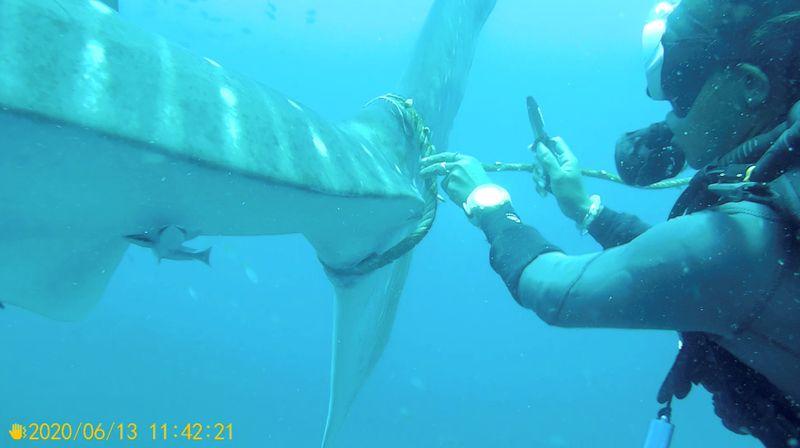 A diver tries to cut a rope from the tail of a whale shark near Koh Tao Island, Thailand June 13, 2020, in this still image obtained from a social media video. Sarakorn Pokaprakarn/via REUTERS THIS IMAGE HAS BEEN SUPPLIED BY A THIRD PARTY. MANDATORY CREDIT.

BANGKOK (Reuters) – Divers in Thailand have captured dramatic footage of their efforts to free a huge whale shark in distress from a piece of nylon rope caught on its tail.

A dive group spotted the shark off the island of Koh Tao on Saturday and tried unsuccessfully with a small knife to remove the rope, which had cut into the tail, leaving a wound. It was not known how the whale became tangled in the rope.

Video of the incident shared on the internet late on Monday showed a veteran dive instructor following the shark, which is harmless to humans, and trying in vain to sever the rope before it swam away.

Whale sharks are among the biggest fish in the sea, typically about 5.5-10 meters (18-33 feet) in length and weighing around 20 tonnes.

Diver Sarakorn Pokaprakan, who recorded the video, told Reuters the shark would likely not survive the injury and it was unfortunate they did not have a bigger knife available when they spotted it.

Efforts were being made by marine authorities and divers to locate the shark.