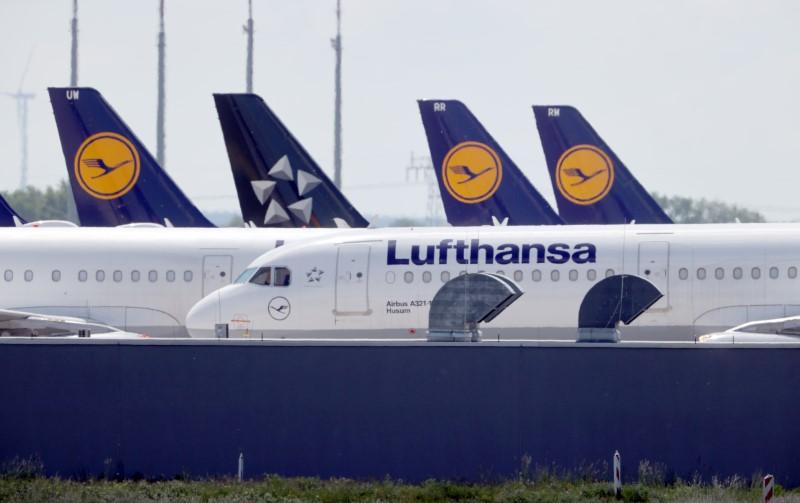 FRANKFURT (Reuters) – Lufthansa vowed to step up up restructuring measures after posting a first-quarter net loss of 2.1 billion euros ($2.35 billion), days after agreeing a state bail-out amid the fallout from the coronavirus pandemic.

FILE PHOTO: Airplanes of German carrier Lufthansa are parked at the Berlin Schoenefeld airport in Schoenefeld, Germany, May 26, 2020. REUTERS/Fabrizio Bensch

The German carrier’s pledge to slash costs comes as it braces for a significant decline in 2020 earnings.

“In view of the very slow recovery in demand, we must now take far-reaching restructuring measures,” said Chief Executive Carsten Spohr, adding the group was in talks with labour representatives over cutbacks.

The first quarter loss, which compares to a net loss of 342 million euros in the year-earlier period, was driven by write-downs of 266 million euros on its fleet, as well as write-downs on the book value of catering business LSG North America by 100 million and on budget unit Eurowings by 57 million, the carrier said on Wednesday.

A slump in fuel hedging contracts was another 950 million euro burden on the bottom line.

Lufthansa, which had grounded almost all its aircraft at the height of the pandemic, confirmed a loss before interest and tax of 1.2 billion euros during the first three months of the year, first reported in April.

The group’s non-executive board on Monday approved a 9 billion euro ($10 billion) government bailout that will force it to cede some of its prized landing slots to rivals.

Lufthansa Group, which includes Swiss, Austrian Airlines and Brussels Airlines, suffered a 98% slump in April passenger numbers from the year-earlier month to 241,000.

But it laid out plans on Wednesday to increase the offered capacity in September to reach 40% of what it had scheduled before the crisis.

Analysts expect the national carrier to be removed from Germany’s benchmark blue-chip index DAX of which Lufthansa has been a constituent since the gauge’s inception in 1988.