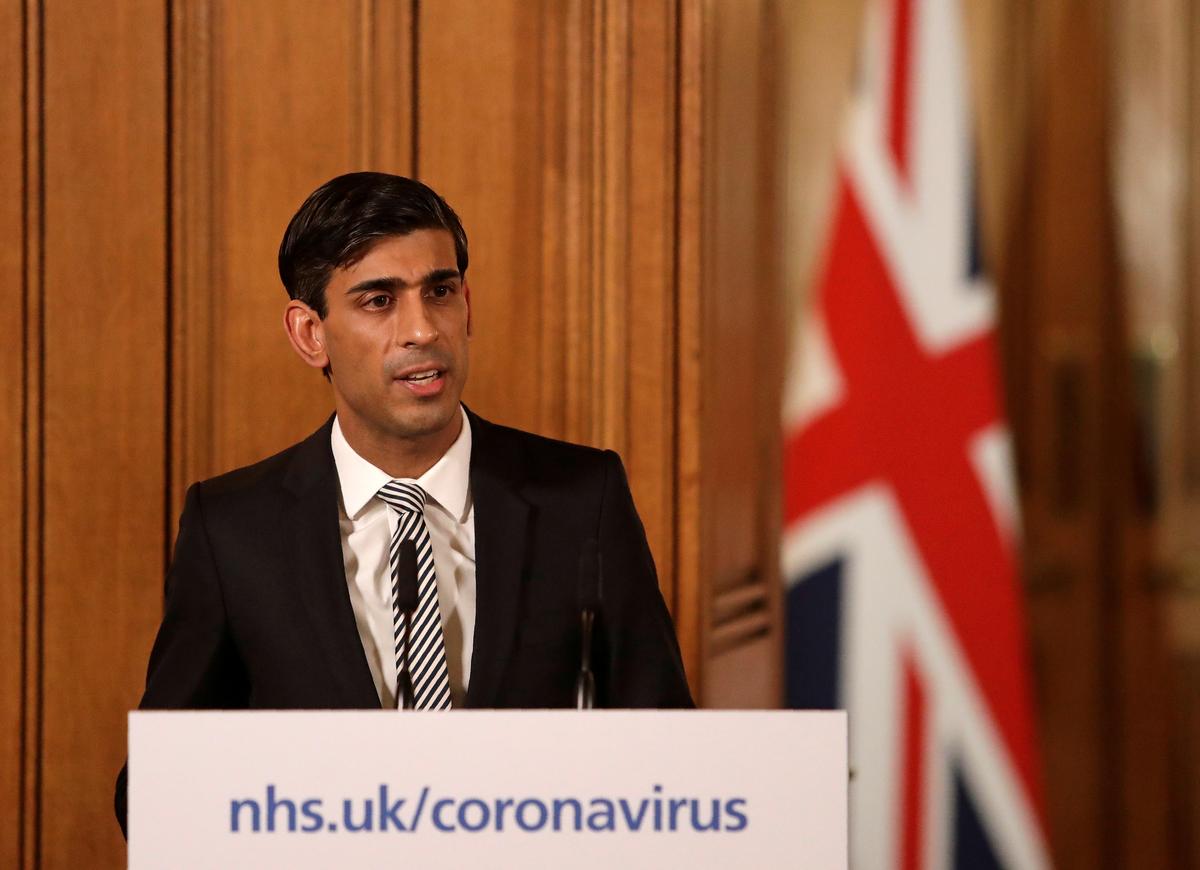 LONDON (Reuters) – British finance minister Rishi Sunak offered fresh help to employers hammered by the coronavirus shutdown on Friday in the form of a gradual phase-in of contributions from them to the government’s costly wage subsidy scheme.

FILE PHOTO: Chancellor of the Exchequer Rishi Sunak speaks during a news conference on the ongoing situation with the coronavirus disease (COVID-19) in London, Britain March 17, 2020. Matt Dunham/Pool via REUTERS

The government has been paying 80% of the wages of some 8.4 million workers since March to avoid companies laying them off as coronavirus restrictions curtailed their operations.

In August the companies will have to resume pension and social security payments for their staff, building up to 10% of the wage costs in September and 20% in October, a lesser requirement than reported by media before the announcement.

Sunak also brought forward to July 1 the start of part-time work under the programme, a demand of businesses seeking to rebuild gradually after the lockdown. He extended another multi-billion-pound income scheme for self-employed workers as well.

“Our top priority has always been to support people, protect jobs and businesses through this crisis,” he said.

“Now, as we begin to re-open our country and kickstart our economy, these schemes will adjust to ensure those who are able to work can do so, while remaining amongst the most generous in the world.”

Although common in other European countries, the income support schemes represented a big shift for the Conservative Party and its traditionally free-market instincts when they were launched in March as the coronavirus crisis swept the world.

Len McCluskey, leader of the Unite trade union, welcomed Friday’s changes but called for more help for the hardest-hit sectors such as aviation and hospitality.

“Without such assistance, and soon, many businesses will simply shut up shop, resulting in the mass unemployment the chancellor has sought to avoid these past two months,” he said.

Carolyn Fairbairn, head of the Confederation of British Industry, said the changes would aid the economy’s recovery.

However, the cost of two income programmes was now likely to shoot past 100 billion pounds ($123 billion), the Institute for Fiscal Studies, a think tank, said, about as much as for the National Health Service over the same March-October period.

Sunak declined to comment on whether he plans to bring forward his next budget statement, due in the autumn, in which he will spell out how he will tackle Britain’s surging debt.

One in three private sector employees are covered by the Coronavirus Job Retention Scheme, which has already cost the state about 15 billion pounds.

It is due to expire at the end of October and Sunak said on Friday it would close for new claims on June 30.

The Bank of England says the scheme could limit a rise in the unemployment rate to about 9%, double its most recent reading but way below an estimated 20% in the United States.

Under the plan, workers are receiving 80% of their wages up to 2,500 pounds a month.

Some employers had warned that they would not be able to pay 20% of the wage costs of their furloughed staff as soon as August – as reported by media before Friday’s announcement – raising the risk of a fresh surge in job losses.

Sunak said that hardship lay ahead for many but the scheme was too expensive to continue indefinitely.

Britain’s borrowing in April alone of over 60 billion pounds was equivalent to almost all of the previous financial year and looks set to hit 300 billion pounds this year, a towering 15% of gross domestic product.

About 2.3 million claims totalling 6.8 billion pounds have been made under the income support scheme for self-employed people.

That had been due to close on Sunday but Sunak said it would be extended and a second, slightly smaller final grant would be available from August.