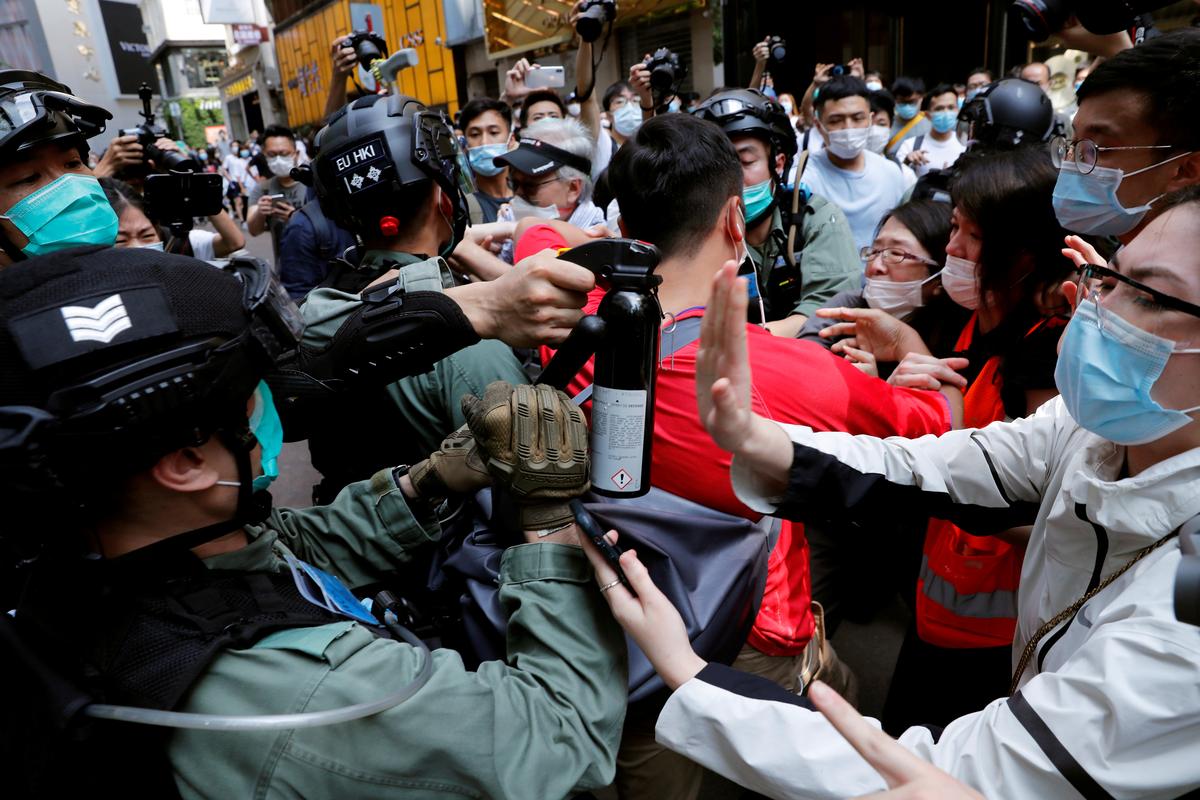 HONG KONG (Reuters) – Riot police were deployed across Hong Kong on Thursday as lawmakers debated a bill that would criminalise disrespect of China’s national anthem, and as the United States piled pressure on China to preserve the city’s freedoms.

Heated debate over the bill – the latest spark of anti-government unrest in the semi-autonomous city – saw two pro-democracy lawmakers removed from the Legislative Council which was then adjourned.

Police fired pepper pellets and made 360 arrests on Wednesday as thousands of people took to the streets in anger over the anthem bill and national security legislation proposed by China that has raised international alarm over freedoms in the city.

Late into the evening, protesters were still cramming sidewalks, chanting for full democracy and for Hong Kong to seek independence from China, saying this is now “the only way out”.

China’s plan to impose the new legislation was “only the latest in a series of actions that fundamentally undermine Hong Kong’s autonomy and freedoms”, he told Congress.

“No reasonable person can assert today that Hong Kong maintains a high degree of autonomy from China, given facts on the ground,” he said.

It could see Chinese intelligence agencies set up bases in the city that was supposed to have a high degree of autonomy under the terms of its 1997 handover to China by former colonial power Britain.

Chinese authorities and the Beijing-backed government in Hong Kong say there is no threat to the city’s high degree of autonomy and the new security law would be tightly focused.

The United States and China clashed over Hong Kong at the United Nations on Wednesday after Beijing opposed a request by Washington for the Security Council to meet over the national security legislation.

The U.S. mission to the United Nations said the issue was “a matter of urgent global concern ​that implicates international peace and security”. China said the legislation was an internal matter for China.

Tensions between Beijing and Washington had already been rising over China’s militarisation of the South China Sea, trade and the coronavirus pandemic.

“Already, international business is facing the pressure of increased tension between the U.S. and China, but the enactment of China’s security law for Hong Kong could take the tension to a whole new level,” said Tara Joseph, president of the American Chamber of Commerce in Hong Kong.

“This is show time for Hong Kong,” Joseph said in a commentary in the South China Morning Post.

U.S. President Donald Trump has promised an announcement on what action he will take over Hong Kong at the end of the week. More than 1,300 U.S. companies have offices in the city, providing around 100,000 jobs.

China’s security plan ignited the first large protests in Hong Kong for months, after the city was rocked by often violent pro-democracy demonstrations in 2019 over an unsuccessful bid to introduce an extradition law to China.

Protesters and pro-democracy politicians say Hong Kong’s National Anthem Bill, which aims to govern the use and playing of the Chinese national anthem, represents another sign of what they see as accelerating interference from Beijing.

Among other things, the bill carries penalties of up to three years jail and/or fines of up to HK$50,000 ($6,450) for those who insult the anthem.

The anthem bill is expected to become law next month.