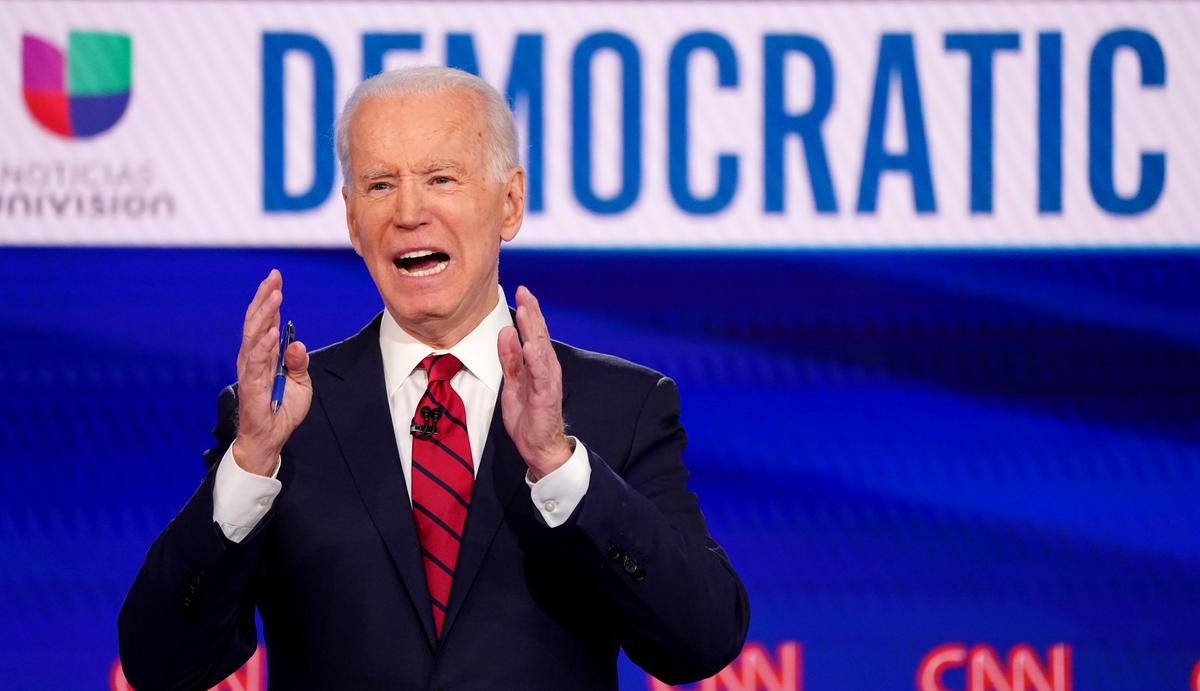 (Reuters) – Presumptive Democratic U.S. presidential nominee Joe Biden, who has vowed to pick a woman to join his ticket, said he would appoint a committee this month to help him vet possible running mates.

The former vice president to Barack Obama has said he would consider six to around a dozen candidates, including several of his former rivals for the party’s nomination to face Republican President Donald Trump in the Nov. 3 election. His plan is to select one well before the Democratic convention in August.

Biden, 77, has said the candidate should be someone who could step into the presidency if needed. He also has sought advice from Obama, who formally endorsed Biden on Tuesday.

“He said: ‘Look, one of the things that worked for you and me, Joe, was that I tried to find someone who had experiences or capacity that I didn’t have,’” Biden said of Obama at a fundraising event last week. “And so I’m gonna need a woman vice president who has capacities, has strengths, where I have weaknesses.”

No woman has ever served as vice president, although two – Democrat Geraldine Ferraro in 1984, and Republican Sarah Palin in 2008 – were major-party nominees for the office.

Here are some women who are likely to be considered, according to people familiar with the process.

Biden said he would consider Harris, 55, for the vice presidential position a day after the senator from California ended her own presidential bid in December.

Harris, who was friendly with Biden’s late son, Beau, is aligned with Biden ideologically and is among the country’s most well-known black politicians.

A number of advisers have pressed Biden and the campaign to consider Harris seriously because the daughter of Jamaican and Indian immigrants could help bring out the key Democratic constituency of black voters in a close election.

Yet several Biden confidants have expressed skepticism about Harris’ loyalty, particularly after her cutting criticism of Biden’s record on race during an early Democratic presidential debate.

The 59-year-old senator from Minnesota defied expectations in the Democratic race with her strong showing in New Hampshire, and her endorsement on the eve of the pivotal Super Tuesday contests on March 3 helped Biden win her home state.

Klobuchar pitched voters on pragmatism and her appeal to independents and moderate Republicans, and some Democratic advisers see her adding to Biden’s potential appeal to the white working-class voters who voted for Trump in 2016.

Picking her as a running mate would be a play to help win important Northern states, including Minnesota, where Democrat Hillary Clinton won by only 1 percentage point in 2016 and which Trump is hoping to flip this year.

Still, some Biden advisers view Minnesota as a state that is less critical to their path to victory than some other Midwestern states, including Wisconsin and Michigan.

Biden said his short list includes Whitmer, 48, who raised her profile as one of the governors confronting a growing coronavirus threat in her home state. But she has also come under fire for a stay-at-home order that some in the state viewed as too restrictive and inconsistently applied.

His advisers see Michigan as a critical state and Whitmer as a rising star. She was also one of the first guests on his new podcast, where Biden called her “one of the most talented people in the country.”

Warren, 70, who dropped out of the presidential race in March, was the last woman among the top tier of candidates in a Democratic field that began as the most diverse in history.

She has not yet endorsed Biden but promised to back the party’s nominee. Biden hinted this month that she had “been helpful” to the campaign.

Yet Biden has said repeatedly he wants a running mate who is “simpatico” on policy and strategy. Some Biden allies see that as disqualifying for Warren, given their vast differences on the U.S. military’s role in the world and how to revamp the U.S. healthcare system.

Lujan Grisham, 60, became the first Latina Democratic governor of a state in 2018, after serving three terms in Congress. She was also the chair of the Congressional Hispanic Caucus and a vocal opponent of Trump’s immigration policies.

Biden has been encouraged to consider a running mate who could boost his support among Latino voters, potentially the largest minority voting bloc in the election.

She served two terms as attorney general of Nevada before becoming the first Latina elected to the U.S. Senate.

A presidential ticket with Cortez Masto could improve Biden’s support among Latino voters, who chose Senator Bernie Sanders in the Nevada caucus.

Yet while Demings was tapped as one of the managers of the House impeachment proceedings against Trump, Democratic advisers said her lower profile may hurt her chances.

In her failed bid to become Georgia’s governor in 2018, Abrams, 46, gained a national profile. The African American from the deep South would likely bring enthusiasm to a ticket with Biden, especially among black voters, but she has minimal executive government experience.

Biden has suggested he would consider her as his running mate, but several allies note his stance that the vice president must be ready on “day one” to be president.