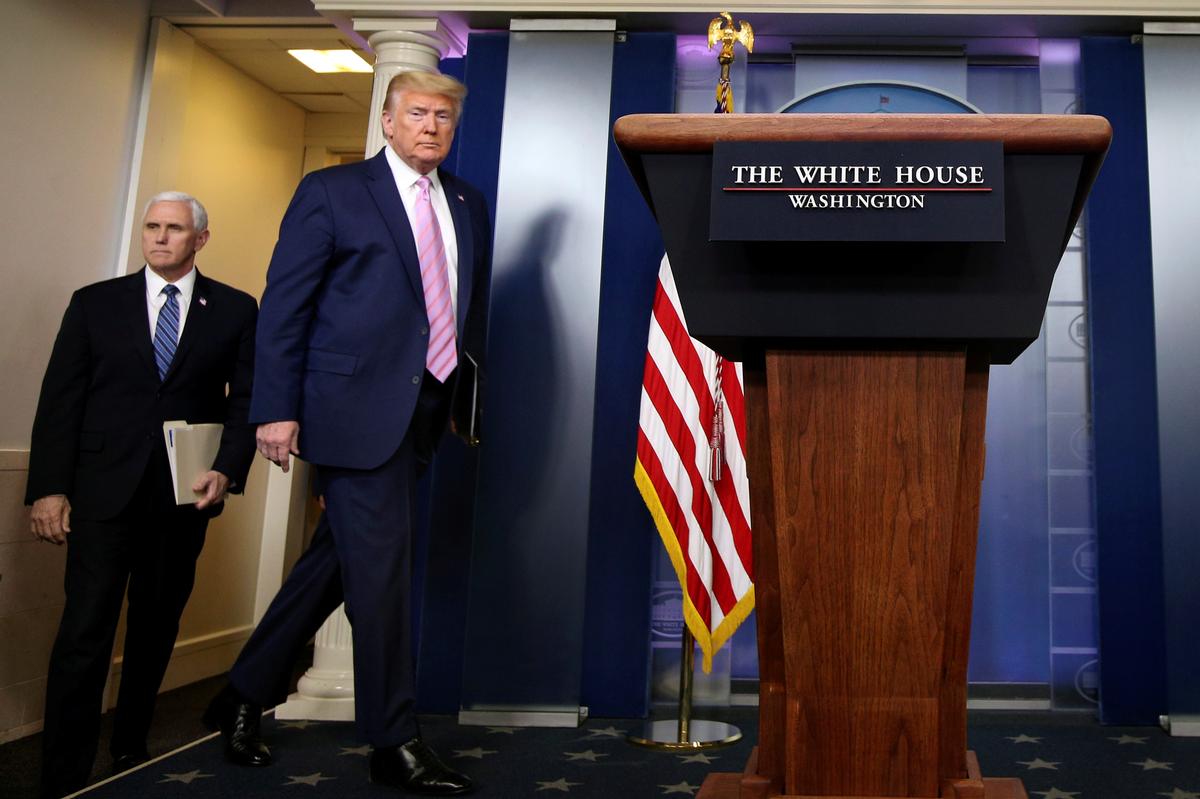 WASHINGTON (Reuters) – Cooped up in the White House, President Donald Trump sees the coronavirus briefings as his main outlet of the day, a reminder for Americans that he is in charge of managing the greatest crisis of a lifetime. Plus, the ratings are good.

Some advisers, however, would prefer a less-is-more approach. They have quietly recommended he not spend so much time at the briefings to avoid being distracted from the challenge at hand and bickering with reporters.

“It’s been suggested a few times, but he thinks it’s just great, and all these ratings,” said a source familiar with the situation.

After an initial bump, polls show approval ratings for Trump’s handling of the pandemic have leveled off, a departure from the usual surge of support Americans typically show their president during a national crisis, such as the high ratings George W. Bush received after the Sept. 11, 2001, attacks.

In a further blow, Trump is down against his Democratic rival, Joe Biden, in most recent national election polls, even though Biden has been reduced to appearing on video from a room in his home, unable to hold campaign events because of the virus.

All of this has caused some alarm among the president’s advisers, in and out of the White House.

While Trump has boasted about the high numbers of Americans who tune in to the briefings, some of the advisers feel he would appear to be more in command if he came to the briefing room, delivered opening remarks and turned the proceedings over to the task force for the details.

“I don’t think it’s helping him,” a Republican close to the White House said of Trump’s lengthy appearances. “If you look at the polling, his job approval numbers are under water. And this is the high water mark part of this crisis. As time goes on, I think things get worse for him. He just hasn’t gotten a huge bounce out of the ‘rally around the president’ aspect of the crisis.”

The debate over the briefings is only part of how daily life has abruptly changed for Trump.

Six weeks ago, he was feeding off the energy of packed campaign rallies, watching the Democratic debates on television and critiquing each candidate’s performance, spending weekends at his Mar-a-Lago club in Florida and playing rounds of golf.

Now, he is fetched up in the Oval Office or sitting at the end of a dining table in the room directly adjacent, TV on in the background, and a phone almost permanently held to his ear.

He talks to governors, emergency management officials, business leaders, lawmakers, people with problems for him to solve, others with solutions to offer. He has always spent many hours on the phone, aides say, but now there is an extra intensity.

His re-election campaign is on pause with no rallies planned and fund-raising events behind held online.

Advisers say Trump privately frets about the state of the collapsing economy, the strength of which earlier this year he had considered a crown jewel of his presidency and the best case for his re-election in November.

The drop-by meetings of counselors and friends that he craves have been sharply curtailed. Anybody who comes close to the president has to be tested for the virus, delaying in-person meetings and limiting the number of them.

The daily briefings are now Trump’s main connection to the outside world. Aides said his participation every day was not initially intended. Vice President Mike Pence, head of the coronavirus task force, handled the first few on his own with members of his team. Trump then became more involved.

“He’s not able to get out of the house right now which is tough. I thinks he just craves people and TV time. He can’t go out and do any events,” said the source familiar with the situation.

Trump has a speechwriter prepare an opening statement, but after reading it aloud he will often preside over a briefing and question-and-answer session that can last more than two hours.

Proceedings can frequently veer off track. One argument he got into earlier this week over whether people should vote by mail – he was opposed – was seen inside Trump’s team as an example of why he should participate less in the briefings.

Others see a Trumpian strategy at play. Television networks have little choice but to air some or all of the briefings, which still receive high ratings as Americans marooned in their homes tune in for details on when the crisis might subside.

Cliff Sims, a former White House official for Trump, said the president is making good use of his appearances.

“They play to his strength as a communicator and make him an ubiquitous presence in people’s lives during a crisis,” he said.