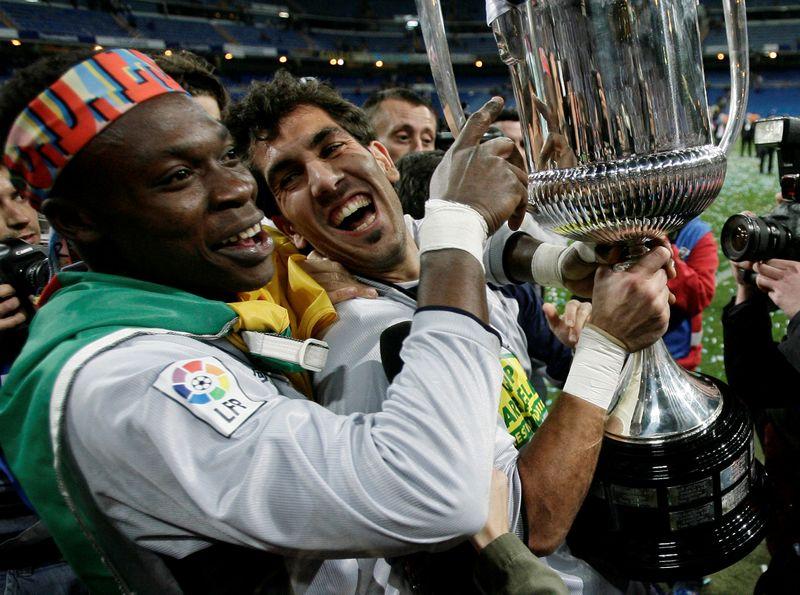 FILE PHOTO: ON THIS DAY — April 12 April 12, 2006 SOCCER – Espanyol goalkeepers Idriss Carlos Kameni and Gorka Iraizoz Moreno celebrate their 4-1 victory over Real Zaragoza in the Copa del Rey final at the Santiago Bernabeu stadium, Madrid. Zaragoza defeated Atletico Madrid, Barcelona and Real Madrid en route to the final but were no match for Espanyol, who clinched their fourth Copa del Rey title with a commanding three-goal victory. Kameni spent eight years with Espanyol and made over 200 appearances for the club before moving to Malaga in 2012. REUTERS/Felix Ordonez/File Photo

TENNIS – Andre Agassi and Boris Becker pose with their respective trophies after the final of the Salem Open in Hong Kong — the 14th and last meeting between the two.

Agassi went on to win the French Open and U.S. Open trophies later that year while Becker announced his retirement after Wimbledon.

Banks, who spent his entire 18-year Major League Baseball (MLB) career with the Cubs, was a 14-times All Star and two-times National League Most Valuable Player.

SOCCER – Bayern Munich general manager Uli Hoeness tries to calm down keeper Oliver Kahn, who was struck in the head by a golf ball thrown by the crowd during their 2-1 victory against Freiburg at the Dreisam Arena.

Kahn received treatment from pitchside medics and stayed on the field for the rest of the game, helping Bayern preserve their one-goal lead.

He retired in 2008 having won eight Bundesliga trophies and one Champions League title.

BASEBALL – San Francisco Giants’ Barry Bonds and his godfather Willie Mays at a press conference after Bonds hit his 660th home run in a 7-5 win against the Milwaukee Brewers in San Francisco.

This home helped him tie Mays for third on the all-time MLB home run list. After the game, Mays presented his godson with a torch decorated with 25 tiny diamonds, symbolic of Bonds’ jersey number.

LuaLua finished the season with four goals and guided Portsmouth to a 13th-place finish in their debut season in the Premier League.

He completed a permanent move from Newcastle United in the close season and remained with Portsmouth for two more years before moving to Olympiakos on a three-year deal in 2007.

RUGBY – New Zealand’s Under-19 team perform their traditional Haka after defeating France 34-11 in the final of the Under-19 World Rugby Championship in Durban.

New Zealand’s native football team were the first sports team to perform the Haka, the ceremonial dance of the Maoris, in 1898 and the tradition has been carried forward by the All Blacks since 1905.

SOCCER – Chelsea striker Hernan Crespo celebrates after scoring the opening goal in a 3-2 defeat by Aston Villa in a Premier League game at Villa Park, Birmingham.

Crespo, who was among a host of new signings made by Chelsea before the start of the season, scored again in stoppage time but the defeat left his side seven points adrift of league leaders Arsenal.

The Argentine won the league with Chelsea in 2005-06 and joined Inter Milan on a two-year loan deal in the close season before completing a permanent move to the Italian club in 2008.

Inter fans began throwing objects on to the field after Esteban Cambiasso’s goal was disallowed and the match had to be abandoned after 73 minutes when Milan goalkeeper Dida was struck by a flare.

Milan were awarded a 3-0 win and advanced 5-0 on aggregate while Inter were fined 132,000 pounds ($163,508) by UEFA and ordered to play their next four European games without spectators in attendance.

PIG OLYMPICS – Piglets compete in a running event during a training session for the Pig Olympics in Moscow.

The Moscow Pig Olympics featured piglets from seven countries competing in disciplines such as running, swineball and swimming, which was introduced in this year’s event.

“Piglets go on to produce a new generation of sport pigs. They don’t get eaten,” said Alexei Sharshkov, vice-president of the Sport-Pig Federation. “How could you eat a competitor who is known around the world?”

Zaragoza defeated Atletico Madrid, Barcelona and Real Madrid en route to the final but were no match for Espanyol, who clinched their fourth Copa del Rey title with a commanding three-goal victory.

Kameni spent eight years with Espanyol and made over 200 appearances for the club before moving to Malaga in 2012.

Compiled by Arvind Sriram in Bengaluru; Editing by Christian Radnedge