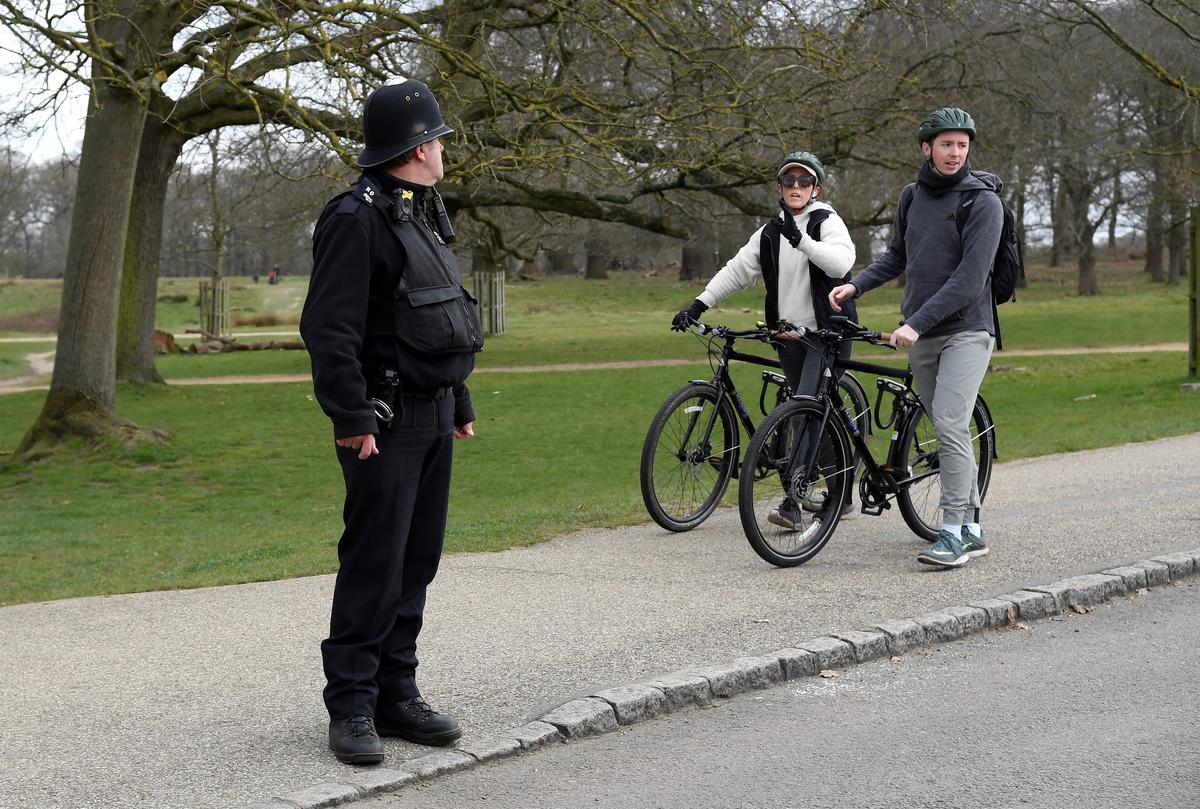 LONDON (Reuters) – Some British police might have gone a “little too far”, a minister said on Tuesday after warnings some forces were turning Britain into a police state by abusing powers to enforce a coronavirus lockdown.

New regulations brought in on Thursday give police the power to issue instant 30-pound ($37) fines to people who gather in groups of more than two people or leave their homes without good reason such as for work, food-shopping or exercise.

However, some officers have been accused of being overzealous by using drones to spy on people taking walks at beauty spots, stopping dog-walkers from driving their pets to open spaces and reports they had even urged some shops not to sell Easter eggs because they were not essential items.

“The tradition of policing in this country is that policemen are citizens in uniform, they are not members of a disciplined hierarchy operating just at the government’s command,” Jonathan Sumption, a former UK Supreme Court judge, told the BBC.

“This is what a police state is like. It’s a state in which the government can issue orders or express preferences with no legal authority and the police will enforce ministers’ wishes.”

Unlike other countries, forces in Britain “police by consent” and pride themselves on being answerable to the public and not the state.

Martin Hewitt, chairman of the National Police Chiefs Council (NPCC), said they were looking to ensure consistency in the police response as everyone got to grip with the new “unprecedented measures”.

“Our plan is that we will engage with people, we will explain the measures … we will encourage people to go home but then as a very last resort we will enforce,” he told BBC radio.

The government drafted in the new regulations amid concern some Britons were failing to heed advice to avoid social gatherings to help prevent the spread of COVID-19.

The weekend before the new regulations were introduced, parks and beauty spots had been packed, leading to the Archbishop of Canterbury to tell people not to act selfishly.

“The police are doing a difficult job and they are doing it well,” Transport Minister Grant Shapps told Sky News.

“I am sure there are individual examples where perhaps you look at it and think that is perhaps a bit further than they should have gone but in general terms I think the case is that if people help everybody out, including the police, by staying home and the rest of it, then there will be no problems.”