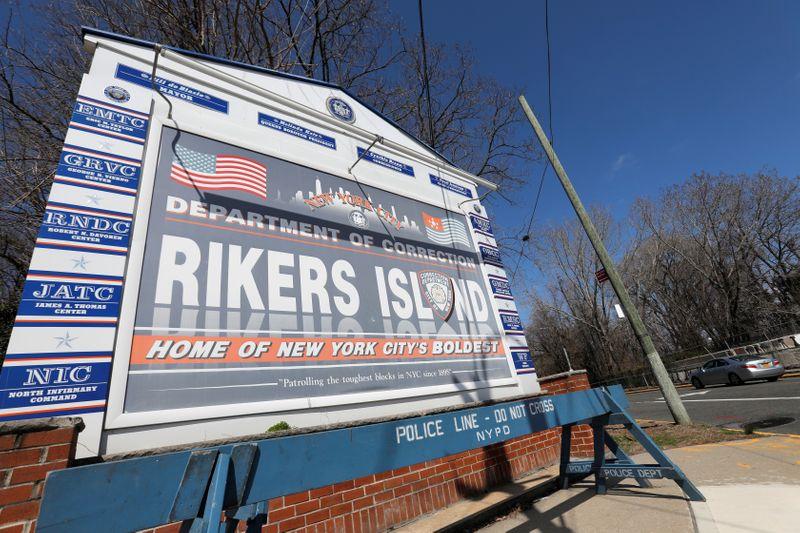 NEW YORK (Reuters) – Sean Hernandez says he covers his mouth and nose with a t-shirt or towel when he leaves his cell, the only defense he can improvise against the coronavirus outbreak now sweeping through New York’s Rikers Island jail system.

FILE PHOTO: Signage is seen outside of Rikers Island, a prison facility, where multiple cases of the coronavirus disease (COVID-19) have been confirmed in Queens, New York City, U.S., March 22, 2020. REUTERS/Andrew Kelly

Inmates have no access to gloves or proper masks and have only cold water to wash their hands, said Hernandez, who was convicted of attempted murder and has served eight years. He said inmates watched on Thursday as a guard coughed, her cheeks turned red and she collapsed to the ground.

“We are pleading with officers” for better defenses, he said. “They just shrug. In the end, we are just inmates, second-class citizens. We are like livestock.”

As of Friday, at least 80 staff and 103 inmates at jails across New York City had tested positive for COVID-19, the disease caused by the coronavirus. The virus appears to be spreading quickly through a jail system famous for its overcrowded cell blocks. The city’s Department of Correction said it is taking many measures to protect detainees, and declined to comment on Hernandez’s account of an infected guard collapsing.

Across the United States, jails and prisons are reporting an accelerating spread of the new disease, and they are taking a varied approach to protecting the inmates in their charge. Thousands of inmates are being released from detention, in some cases with little or no medical screening to determine if they may be infected by the coronavirus and at risk of spreading it into the community, Reuters found.

Since Sunday, jails have reported 104 staff and 146 inmates with confirmed cases of COVID-19, according to a Reuters survey of cities and counties that run America’s 20 largest jails. The numbers are almost certainly an undercount given the fast spread of the virus. Hot spots include Cook County jail in Chicago, Illinois. Since the first case was confirmed there on Sunday, the virus has infected 38 inmates and nine staff. Test results are pending for 123 other detainees.

Inmate advocates, local officials and public defenders are urging jails and prisons to speed up the release of inmates. Jails typically hold people for relatively short periods as they await trial. They have more flexibility to reduce populations than state or federal prisons, whose inmates have been convicted and sentenced.

“We are nowhere close to the rate of release we need to see to stop the spread of COVID-19,” said Udi Ofer, director of the justice division at the American Civil Liberties Union. “Every day that government officials do not act is another day that lives are put at risk.”

Some groups are pushing back. Victims’ rights group Marsy’s Law, named after the murdered sister of billionaire Henry Nicholas, has criticized the releases, saying victims of crimes should be notified before the people who committed them are let out — a process that could delay releases of some inmates by weeks or months. However, officials supervising releases in New York, Los Angeles, Houston and other major cities say they are releasing only low-level, non-violent offenders.

New York City has freed about 450 inmates from its jails since last weekend as it scrambles to contain the virus, which has killed more than 28,000 people, including more than 1,600 in the United States.

The city’s independent oversight body for the jails, the Board of Correction, has identified around 2,000 people who could be released — including inmates aged 50 and above, the infirm, nonviolent, low-level offenders or people jailed for parole violations. The city has declined to disclose the number of inmates it has tested for the virus.

The mayor’s office said the city was evaluating who to free in consultation with state officials, courts and district attorneys. “Hundreds more will be released soon,” said Colby Hamilton, a spokesman for the mayor.

‘THERE IS NO PROTECTION’

The United States has more people behind bars than any other nation, a total incarcerated population of nearly 2.3 million as of 2017, including nearly 1.5 million in state and federal prisons and another 745,000 in local jails, according to the U.S. Bureau of Justice Statistics.

An inmate released on Monday from Rikers Island said sick and healthy people often mingled freely inside the jail. After a prisoner and a guard in his area of the jail were diagnosed with COVID-19, the inmate said he started spending more time in his two-man cell. But he still had to line up with other inmates at the medicine window to get his daily dose of methadone, a drug-addiction treatment.

“There is no protection,” said the 32-year-old inmate, who spoke on condition of anonymity. “You want to get away from people but you can’t.”

The New York City Department of Correction said it has taken measures to address the outbreak, including distributing masks to inmates in areas where someone tested positive for COVID-19, promoting distancing between inmates, cleaning cells and providing soap.

“The Department of Correction is doing everything we can to safely and humanely house people in our custody amid the broader COVID-19 crisis,” said Peter Thorne, the deputy commissioner of public information.

Some jails are releasing inmates who may be ill. In Marietta, Georgia, Aubrey Hardyway, 21, developed a cough, headache, sore throat and a 103-degree fever while held at the Cobb County Adult Detention Center on theft charges. “I just couldn’t take it, I was feeling terrible,” he said.

Four days after falling ill, Hardyway says he was tested for flu and strep throat. When both came back negative, he was taken to a nearby hospital for blood work and other tests. Hardyway says he was never told if he was tested for the coronavirus. A doctor urged deputies to quarantine Hardyway, he says, but he was released hours later after he returned to jail and his friends paid his bond.

Hardyway says he believes he might have exposed cellmates and guards who were in contact with him. At least one deputy has tested positive for the virus and a second has been quarantined after showing symptoms, according to two sources familiar with the jail’s operations.

The Cobb County Sheriff’s Office did not respond to requests for comment.

Jails report they are adopting different tactics to keep the virus out. Some screen new inmates before they’re even booked, taking their temperatures inside police cruisers or garages. Some are quarantining new arrivals until they are medically cleared to join the general population. Some are doing nothing.

A pandemic could be “very dangerous for our inmate population,” Parr said.

Some courts are beginning to agree: A federal judge late on Thursday ordered federal authorities to immediately release 10 people who were being held in county jails in New Jersey while their immigration cases were being heard. U.S. District Judge Analisa Torres ruled that each detainee “faces an imminent risk of death or serious injury in immigration detention” because of the outbreak.

Inmate releases are being driven by judges, public defenders, prosecutors and occasional orders by political leaders. New Jersey’s chief justice ordered the release of 1,000 jail inmates statewide at the start of the week, seeking to prevent deaths behind bars.

In some counties, police are issuing citations for low-level crimes instead of arresting people. Furloughing work-release prisoners is another strategy to try to limit spread of the virus in crowded and often-unsanitary facilities, where the quality of medical care varies dramatically. Some worry the churn of detainees — coupled with the constant shuffle of officers coming from outside — will spread the illness across jails and communities.

Among a dozen large U.S. jails surveyed by Reuters, there was no uniform approach to preventing an infected inmate from spreading the coronavirus into a community.

Some jurisdictions screened inmates before letting them out. Others, such as King County Correctional Facility in Washington, did not.

“At this time, there is no enhanced screening of inmates occurring at release unless there is some type of pre-existing medical or psychiatric issue,” said Captain David Weirich of the King County Department of Adult and Juvenile Detention, where at least one correctional officer has tested positive for the coronavirus according to the county.

In Ohio, the Hamilton County Justice Center is checking the temperature of all released inmates before they leave. At the John E. Polk Correctional Facility in Seminole, Florida, if an inmate shows any signs of illness, they’re referred to an outside medical provider. Other jails are offering literature on COVID-19 to exiting inmates.

Inmates in federal prisons said some religious services have been canceled, along with education programs and most visits.

“If the virus gets in here, and we are all expecting it to, we are doomed,” said Steven Jones, a 55-year-old inmate at a federal prison in Littleton, Colorado.