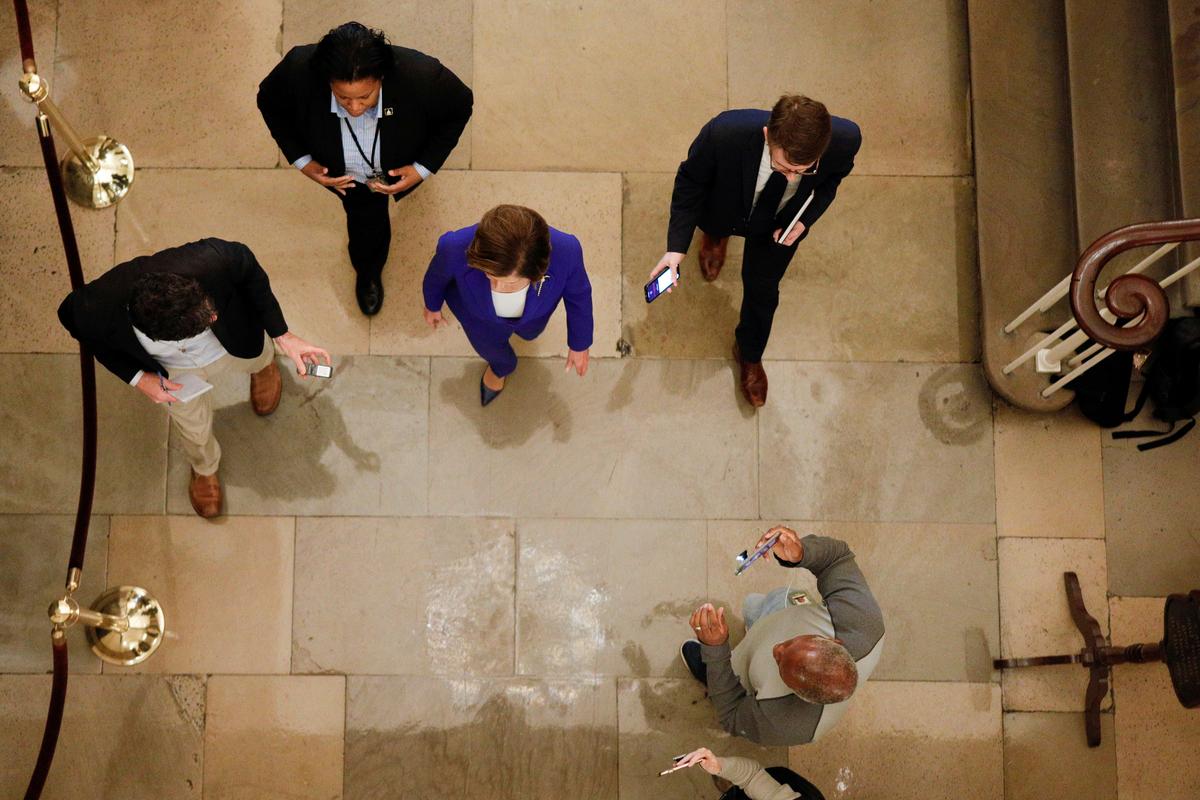 WASHINGTON (Reuters) – The U.S. House was poised on Friday to pass a $2.2 trillion coronavirus relief package, with Democratic and Republican aides saying enough members had flocked to the Capitol to override a holdout Republican lawmaker who threatened to delay passage.

House Speaker Nancy Pelosi (D-CA) speaks to news reporters while walking to the House Chamber floor, ahead of a vote on relief for the coronavirus (COVID-19) disease on Capitol Hill in Washington, U.S., March 27, 2020. REUTERS/Tom Brenner

Leadership of the Democratic-controlled House of Representatives and top Republicans aimed to pass the largest relief measure that Congress has ever taken up in a voice vote, one of the fastest methods available, and pass it on to the Republican president for his signature.

But Republican Representative Thomas Massie wrote on Twitter that he did not like that idea and would try to force the chamber to hold a formal, recorded vote. That could potentially delay action.

Lawmakers sat several seats apart from each other, maintaining distance as they waited for a chance to speak. The House scheduled three hours of debate, headed toward a possible vote sometime after noon EDT (1600 GMT).

As the debate unfolded, Massie sat toward the back of the chamber, chatting with other Republicans. It was unclear whether he would speak.

Republican President Donald Trump lashed out at Massie on Twitter, calling him a “third rate Grandstander.”

“He just wants the publicity. He can’t stop it, only delay,” the president wrote in a series of tweets. “…. throw Massie out of Republican Party!”

To minimize the threat of infection due to the coronavirus, the Capitol has laid out special procedures. Members are barred from sitting next to one another and would be called from their offices alphabetically for the vote. They will be required to use hand sanitizer before entering the chamber and encouraged to take the stairs, rather than use elevators, to better maintain social distancing.

Congress members and aides said they expected there would be enough lawmakers on hand to push through a vote if Massie demanded one. Republican Representative Greg Pence – Vice President Mike Pence’s older brother – said he had driven from Indiana in the Midwest for the vote, and others from as far away as California were present for the debate.

Most of the House’s 430 current members are in their home districts because of the coronavirus outbreak and would need to go to Washington if Massie forces a recorded vote – which could put them at further risk of contagion. At least three members of Congress have tested positive for the coronavirus and more than two dozen have self-quarantined to limit its spread.

The rescue package – which would be the largest fiscal relief measure ever passed by Congress – will rush direct payments to Americans within three weeks if the House backs it and Trump signs it into law. It passed the Republican-led Senate unanimously on Wednesday night.

The $2.2 trillion measure includes $500 billion to help hard-hit industries and $290 billion for payments of up to $3,000 to millions of families.

The rare but deep, bipartisan support in Congress underscored how seriously lawmakers are taking the global pandemic as Americans suffer and the medical system threatens to buckle.

The United States surpassed China and Italy on Thursday as the country with the most coronavirus cases. The number of U.S. cases passed 85,000, and the death toll exceeded 1,200.

The Labor Department on Thursday reported the number of Americans filing claims for unemployment benefits surged to 3.28 million, the highest level ever.