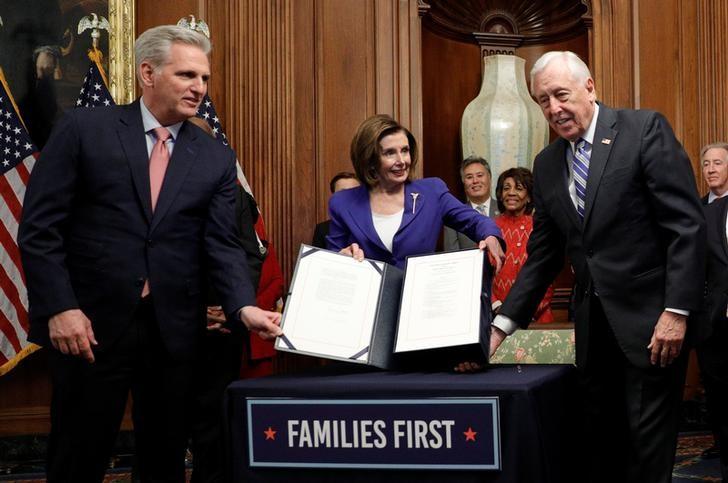 WASHINGTON (Reuters) – The U.S. House of Representatives on Friday approved a $2.2 trillion aid package – the largest in history – to help cope with the economic downturn inflicted by the intensifying coronavirus pandemic, and President Donald Trump quickly signed it into law.

The massive bill passed the Senate and House of Representatives nearly unanimously. The rare bipartisan action underscored how seriously Republican and Democratic lawmakers are taking the global pandemic as Americans suffer, and the medical system threatens to buckle.

“Our nation faces an economic and health emergency of historic proportions due to the coronavirus pandemic, the worst pandemic in over 100 years,” House Speaker Nancy Pelosi said at the close of a three-hour debate before the lower chamber approved the bill. “Whatever we do next, right now we’re going to pass this legislation.”

The massive bill also rushes billions of dollars to medical providers on the front lines of the outbreak.

The Democratic-led House approved the package on a voice vote, turning back a procedural challenge from Republican Representative Thomas Massie, who had sought to force a formal, recorded vote.

To keep Massie’s gambit from delaying the bill’s passage, hundreds of lawmakers from both parties returned to Washington despite the risk of contracting coronavirus. For many, that meant long drives or overnight flights.

Massie, who has repeatedly defied party leaders, wrote on Twitter that he thought the bill contained too much extraneous spending and gave too much power to the Federal Reserve, the U.S. central bank. His fellow lawmakers overruled his request for a recorded vote.

Trump, a Republican, attacked Massie on Twitter, calling him a “third rate Grandstander” and saying he should be thrown out of the party. “He just wants the publicity,” wrote the president, who last week began pushing for urgent action on coronavirus after long downplaying the risk.

Democratic and Republican leaders asked members to return to Washington to ensure there would be enough present to head off Massie’s gambit. Representatives from as far away as California were present for the debate. The session was held under special rules to limit the spread of the disease among members, who used hand sanitizer and in at least one case wore protective gloves.

At least five members of Congress have tested positive for the coronavirus and more than two dozen have self-quarantined to limit its spread.

The Senate, which approved the bill in a unanimous vote on Wednesday evening, has adjourned and is not scheduled to return to Washington until April 20.

‘THE VIRUS IS HERE’

Democratic and Republican leaders appeared together at a news conference to celebrate the bill’s passage — also unusual event for a chamber that is normally sharply divided along partisan lines.

“The virus is here. We did not ask for it, we did not invite it. We did not choose it. But with the passing of the bill you will see that we will fight it together, and we will win together,” said Kevin McCarthy, the top House Republican.

He did not say whether Massie would face any disciplinary measures from the party.

The rescue package is the largest fiscal relief measure ever by Congress.

The $2.2 trillion measure includes $500 billion to help hard-hit industries and $290 billion for payments of up to $3,000 to millions of families.

Adding to the misery, the Labor Department reported the number of Americans filing claims for unemployment benefits surged to 3.28 million, the highest level ever.