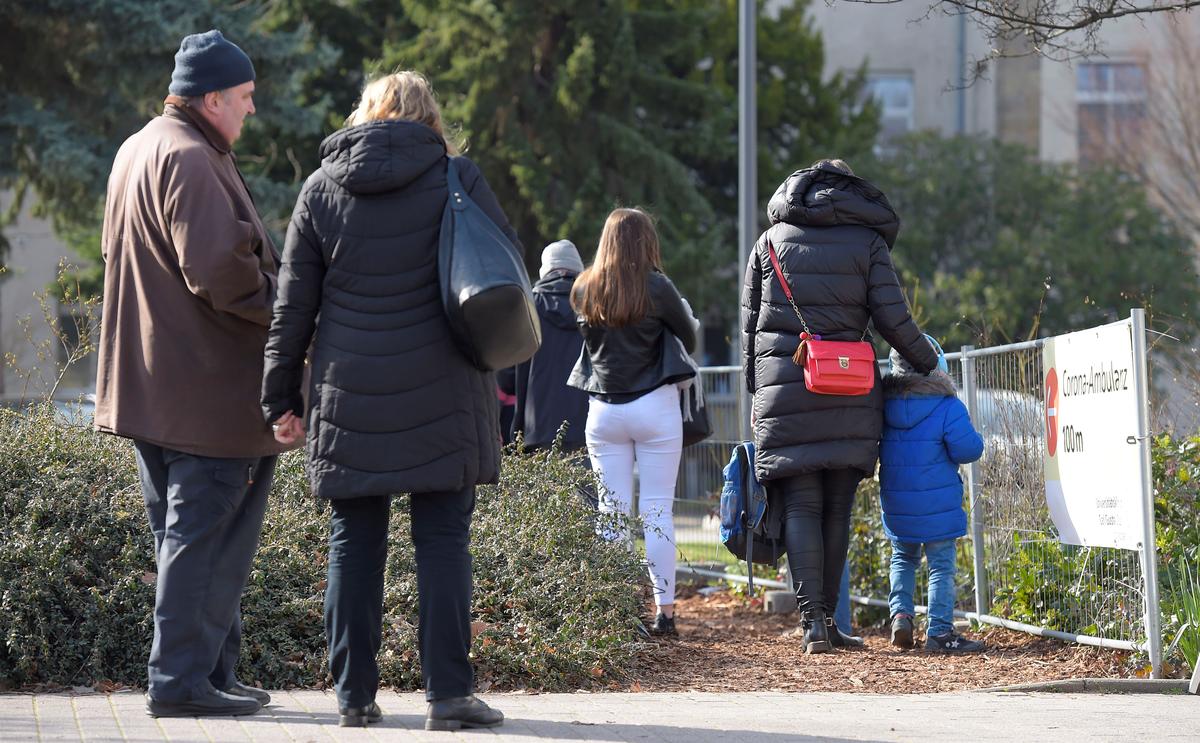 People stand lining up for a test in a coronavirus disease (COVID-19) clearing-up centre in Dresden, Germany, March 16, 2020. REUTERS/Matthias Rietschel

If confirmed, the moves would bring Germany a step nearer to a state of total lockdown like that in force in Italy and Spain, where most people are confined to their homes, and wreak further economic disruption.

The epidemic has already snuffed out hope of a first-quarter upswing on which people had been counting to avert recession, and will weigh on Germany’s economy until at least the third quarter, the Economy Ministry said.

The usually well-informed Bild said the government had recommended regions shut non-essential shops, ban church services and allow restaurants to open only between 6 a.m. and 6 p.m. Germany’s 16 federal states must decide which of the measures to apply and how, Bild said.

There was no immediate government confirmation of the report. Chancellor Angela Merkel was due to hold a news conference at 6 p.m. (1700 GMT).

With schools already shut, almost 5,000 people known to be infected and 12 dead in official figures published at the weekend, and case numbers rising rapidly, many fear Germany is heading for the kind of disruption to everyday life that other countries, especially Italy, have experienced in recent weeks.

The Economy Ministry warned that even in a best-case scenario where the severed supply chains that link Germany’s export-dependent economy to the world are quickly repaired, stabilisation would come in the third quarter at the earliest.

But with disruption being felt across the economy, particularly in the transport sector, it is far from clear whether that will transpire, even with the help of huge aid programmes unveiled by federal and state governments.

Flagship carrier Lufthansa said it would scrap 90% of all long-haul flights and run only a fifth of flights originally planned within Europe. Holiday operator TUI, the world’s biggest, said it would scrap most operations and apply for state aid in response to collapsing demand.

The government has advised citizens against all non-essential trips abroad. Lufthansa said it was planning to run further flights to repatriate thousands of Germans still stranded abroad.

Baden-Wuerttemberg, the southwestern state that is home to carmaker Daimler and also facing a major outbreak, announced it was stopping air travel, closing Stuttgart and Karlsruhe airports in a bid to contain the virus.

The federal government has also loosened insolvency rules that risked forcing companies into declaring bankruptcy while they waited for state aid to arrive.

Bavaria, the wealthy southern state where some of Germany’s biggest companies, including carmaker BMW and engineering giant Siemens, are based, launched a 10-billion-euro ($11.13 billion) fund to let the regional government buy stakes in struggling companies.

“The situation is very serious and changing daily, unfortunately not for the better,” said Bavarian premier Markus Soeder, whose state is among the worst hit by the epidemic. “We will not abandon anyone.”