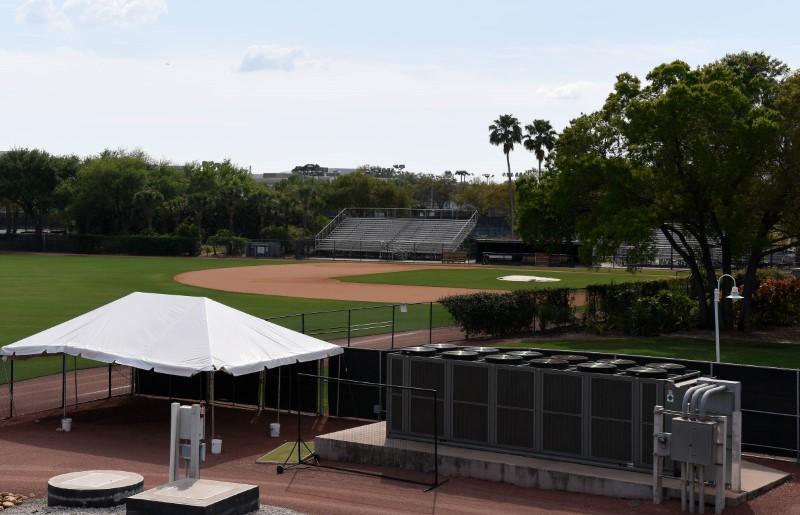 Major League Baseball declared an early end to spring training on Friday, allowing players to return home if they wish.

Mar 13, 2020; Tampa, Florida, USA; An empty practice field near George M. Steinbrenner Field is seen following the cancellation of a spring training game between the Detroit Tigers at New York Yankees due to the Covid 19 coronavirus outbreak. Major League Baseball is also delaying the start of the regular season by at least two weeks. Jonathan Dyer-USA TODAY Sports

A day earlier, MLB had halted all Grapefruit League and Cactus League action while announcing that the regular season would be delayed at least two weeks due to the coronavirus pandemic.

It was initially unclear whether players and teams would remain together in Florida and Arizona.

Multiple media outlets reported that MLB officials met with officials from the MLB Players Association on Friday before releasing a statement that read, in part, “Major League players can elect to return home, remain in their Spring Training cities, or return to their Club’s home city. This step is in the best interests of players, employees and the communities who host Spring Training.

“MLB will continue to monitor ongoing events and undertake the precautions and best practices recommended by public health experts. We send our best wishes to all the individuals and communities who have been impacted by coronavirus.”

According to Forbes, the MLBPA advised players to go to their offseason homes.

“I think it’s probably best for guys to be able to go home until we figure out more as far as where we’re going to be and what our timeline and schedule is looking like,” Pittsburgh Pirates pitcher Jameson Taillon, the team’s player representative, said on a conference call.

“We have a shot at a World Series title,” Yankees pitcher Zack Britton, the club’s player rep, told MLB.com. “We want to be prepared to seize that opportunity. Guys aren’t panicking about this thing. We understand that it’s serious, but the Yankees have a ton of resources in the area. We feel like this is a good place for us to be.”

Yankees manager Aaron Boone, general manager Brian Cashman and the team’s training and conditioning staffers also will stay in Tampa, according to MLB.com.

“We’ve tried to map out the best next steps, and we all recognize it’s going to take a lot of give and take, with understanding and compassion and empathy along the way.”

Red Sox chief baseball officer Chaim Bloom said on a conference call, “We’re trying to make sure (player travel) happens in a safe and orderly manner. For players who want to stay here, we will have the facility available to them if they want to stay here and, obviously, we’re going to continue and intensify all the precautions taken to make sure this is a clean and safe environment for everybody here.”

Atlanta Braves president of baseball operations Alex Anthopoulos said on a conference call, “I think everyone understands the circumstances right now. No one has ever faced anything like this. I think everyone knows things are fluid and things are changing. We’re getting information and updates. But you just have to look at this week to see how much things have changed. So, at this point, we can’t get too far ahead of ourselves.”

Kansas City Royals general manager Dayton Moore told the Kansas City Star, “The one thing I know about professional athletes and baseball players, they adapt really well. You never want to miss time. These guys have pinpointed Opening Day once the season concluded in 2019, but they’ll adjust. For some of our players, a little extra time will be good for them physically and mentally.”