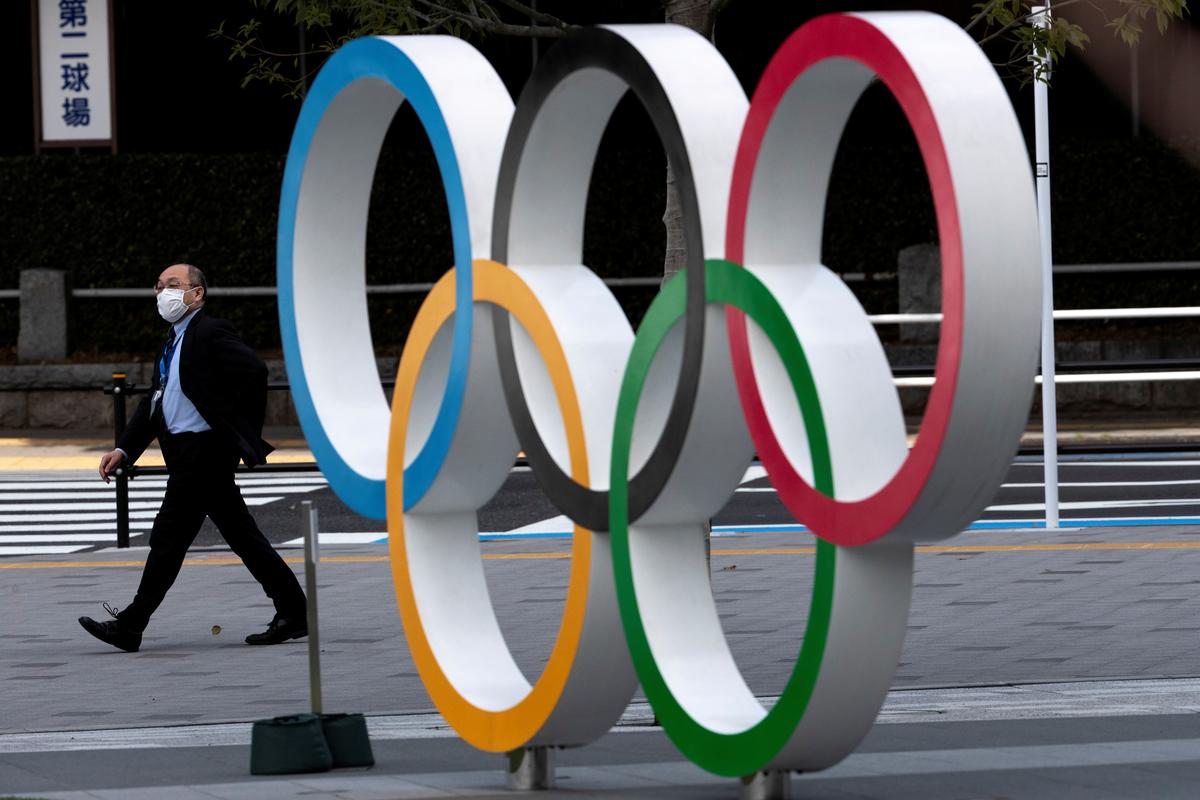 (Reuters) – Major sports events around the world which have been hit by the coronavirus outbreak:

A man wearing a protective face mask, following an outbreak of the coronavirus disease (COVID-19), walks past walk past the Olympic rings in front of the Japan Olympics Museum in Tokyo, Japan March 13, 2020. REUTERS/Athit Perawongmetha

– The Tokyo 2020 Olympics torch lighting ceremony in ancient Olympia was held without spectators.

– The NBA has suspended its season.

– The NHL has suspended its season.

– The World Athletics Indoor Championships (Nanjing; March 13-15) were postponed until next year. They will be held in the same city from March 19-21, 2021.

– The Paris and Barcelona marathons were postponed.

– All soccer matches in Spain’s top two divisions were postponed for two weeks.

– All soccer in the Netherlands was suspended until the end of March. The national team canceled their Euros warm-up matches — against U.S. (March 26) and Spain (March 29).

– FIFA and the Asian Football Confederation have agreed to postpone Asian World Cup qualifying matches in March and June.

– UEFA postponed two Europa League ties after one side, Spain’s Getafe, refused to travel to Italy and another, AS Roma, said they had been denied permission to travel to Spain.

– Premier League: Manchester City’s game against Arsenal (March 11) was postponed because players from the London club had contact with the owner of Greek side Olympiakos, who has contracted the virus.

– Ligue 1: The governing body of France’s Ligue 1 and Ligue 2 will meet on Friday to decide whether to suspend professional matches, French media reported.

– New seasons in the Chinese, Japanese and South Korean leagues were postponed.

– A friendly between Germany and Italy (Nuremberg; March 31) will take place without fans.

– Tickets are not being sold for the Euro 2020 qualifying playoff semi-finals between Bulgaria and Hungary and Bosnia and Northern Ireland.

– Four rounds of the MotoGP season in Qatar, Thailand, Texas and Argentina will not go ahead as scheduled.

– The ATP suspended its professional men’s tennis tour for six weeks after the Miami Open (March 23-April 5) was canceled.

– The BNP Paribas Open in Indian Wells was canceled.

– The WTA said its events in Mexico and Colombia in March and April would not be held. The Xi’an Open and Kunming Open had already been canceled.

– The Singapore and Hong Kong legs of the World Rugby Sevens Series were postponed from April to October.

– Rugby Europe announced a suspension of all its matches and tournaments from March 13-April 15.

– The world championships in South Korea, were pushed back provisionally from March to June.

– The International skiing federation canceled the final races of the men’s Alpine skiing.

– The World Cup finals in Cortina were canceled along with the last three women’s races in Are.

– The women’s world ice hockey championships in Canada were canceled.

– The Speed skating world championships in Seoul have been postponed until at least October.

– The March 16-22 world figure skating championships in Montreal were canceled.

– The Players Championship in Florida was canceled after the first round. The next three PGA events have also been scrapped.

– The Honda LPGA Thailand event and the HSBC Women’s World Championship in Singapore were canceled.

– The Indian Open, the Maybank Championship in Kuala Lumpur and the China Open have all been postponed.

– The final two stages of the UAE Tour were canceled after two Italian participants tested positive.

– The final qualification tournament in Taiwan for the Olympics was put back from April to June 17-21, while the March 22-26 qualification event in Arizona was postponed here

– Japan’s professional league postponed the start of the season.

– India’s government ordered international matches to be played in empty stadiums. Two one-dayers against South Africa will be held without spectators.

– Australia’s three-match one-day series against New Zealand in Sydney and Hobart will be held without fans.

– The International Judo Federation canceled all Olympic qualification events through to the end of April.